Sorceress was truly puzzled when she had seen such a motley company. She was very old and didn’t like  when there was a lot of noise around.
But friends all began talking at the same time anticipating the fulfillment of their wishes. Everyone tried to speak louder and louder, so he could be heard. House, Owl, six Giants- Lilliputians. Sorceress was at a loss … The words in her head were rolling around,  confused and combined in completely different senses. At some point, it seemed to her that if Giants and House came along, they asked to correct the mistake, the one when she had accidentally spilled magic potion, and Giants started turning into Lilliputians when they approached House. Turning everywhere except the feet. 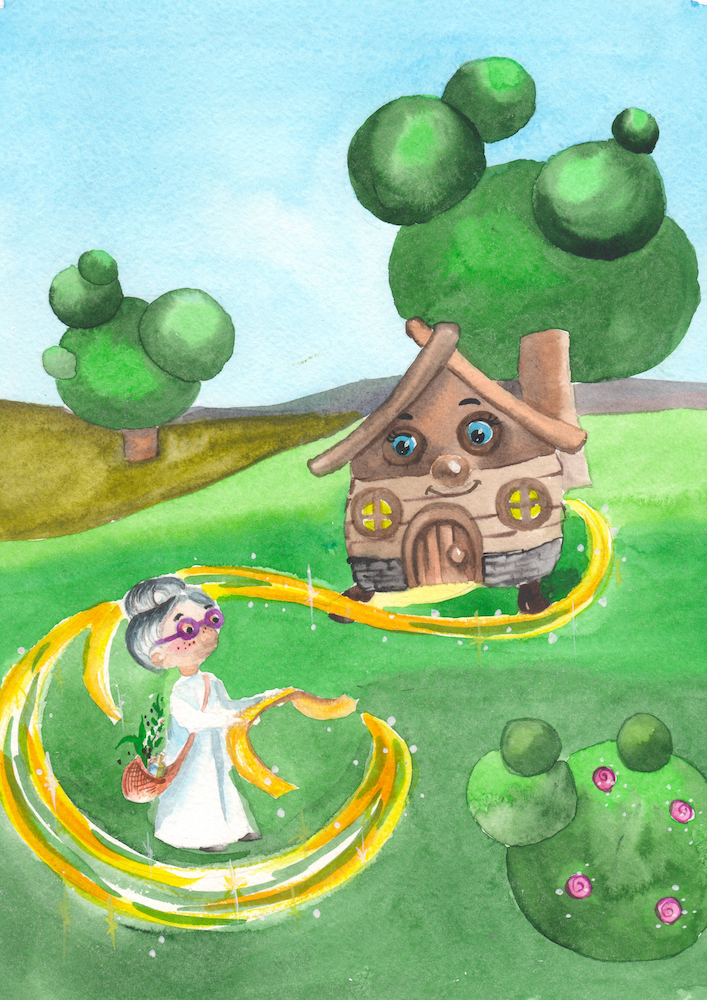 Sorceress took her belt off and began to read magic words in a whisper. Suddenly golden pollen stretched from House, spinning around Giants, and they became quite small, just like Mouse and Gnome.

House Number Six, Owl and Giants-Lilliputians themselves stopped talking with surprise. Old Sorceress looked at them and smiled. It seemed to her that she had corrected her past mistake in an amazing way.

Wise Owl was first to break the silence:

– We’ve come such a long way to beg you make our hearts’ desires come true. Forgive that we were talking all at once and you have misunderstood our request.

Old Sorceress has already realized that she was too hasty and got the friends wrong.

At this awkward moment, the most cheerful of Lilliputians said: “And I like to be of the same height as Gnome, Mouse, Bunny, and Hedgehog. We can all spend time together !!! And I still want to become a real traveler. ”

House Number Six looked at embarrassed old Sorceress and decided to ask her a question: “Do you have a heart’s desire?”

– On the border of two countries there is a large and beautiful house. A century-old apple orchard grows around it. Magical birds are flying there. Blossoming flowers aroma is so thick it can be used as perfume. In this stone house lives young Sorceress.

Every morning she records all the travelers of Magic country in a large book. This book reflects all the paths and roads that travelers walk. This book can help anyone return home, in case there are any troubles on the road or wrong forks distract them off the road. She is Road home keeper. My heart’s desire is to live in this stone house and keep roads and paths. I really want to live in this house and, perhaps, I’ll go with you to ask young Sorceress for permission to stay a little and look at this book.