On the triangular island there was a lot of activity. The ship that Captain Boris, Mouse and Gnome had found needed to be cleared from dry palm branches and sand that had crept into all the slits, even the tiniest ones.

When our friends, tired but satisfied, finished their work, it became clear to everyone that first thing they must move the ship forward into the Ocean, and then recruit a crew of sailors.

They were sitting on the deck and discussing this setback over and over. Mouse was upset – by this time she didn’t want to travel at all, she missed House Number Six and her friends in Magic Forest.

Gnome was really worried about his girlfriend, and most of all he was anxious about the fact that for now he had not seen any possibility for them to get home on water.

Captain Boris was the one who clearly understood: although he had found his ship, without a crew on board you shouldn’t even think about sailing; Mouse and Gnome were very nice, but not suitable as sailors at all.

On other island Crab with Baby-Shark were also dabbling thoughtfully at water’s edge.

Crab was worried about his friends: how could they get home on such a small boat made from coconut shell.  The most responsible Cloud, who hadn’t seen friends since their arrival here, heard their conversation.

– And where is Mouse and Gnome? – She asked Baby- Shark.

Then friends told Cloud how they had dug the hole, cracked a coconut, and saw Mouse and Gnome off to a new journey. 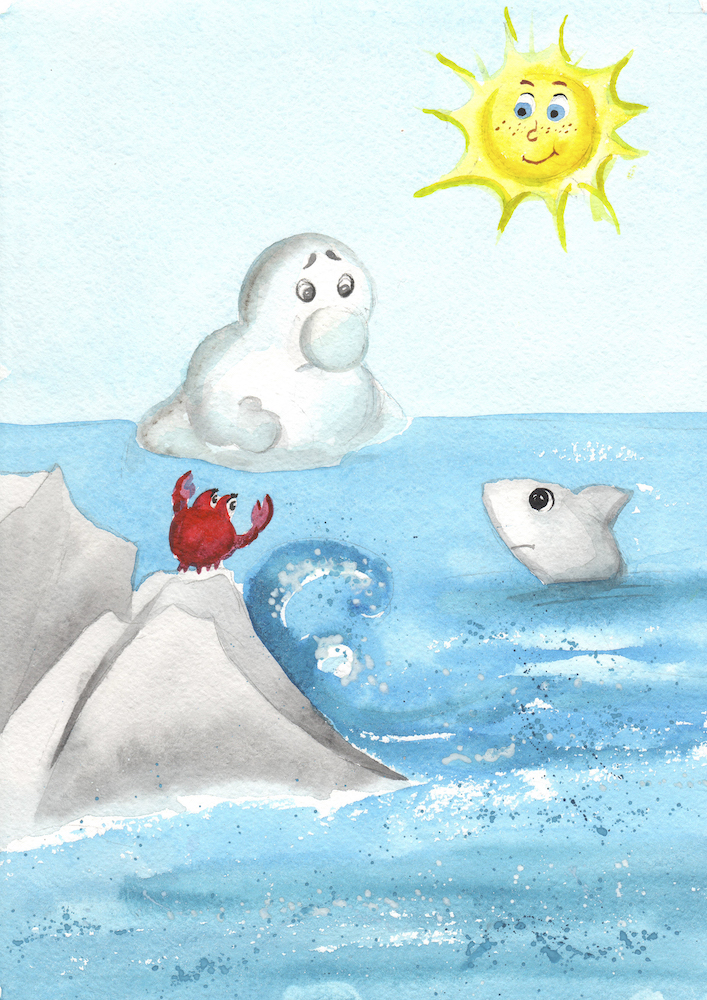 Cloud listened and listened, then she was silent for a long time, and suddenly burst into tears. Since she was still in the Ocean, water began to rise swiftly. Crab and Baby-Shark were looking at her with concern.

– Wait, don’t cry, – said Crab. – You are going to flood the whole island. Better tell me why are you crying, or we’ll start worrying about our friends.

Cloud was very embarrassed, because Sunny had chosen her as the most responsible one, and she was playing in warm and tender Ocean water and had completely forgotten about the most important task in her life. And now she was very ashamed to ask Sunny for help, that’s why she was crying so bitterly.

– Think for a moment, what if our friends need help, and you won’t know about it, because you are afraid to admit your mistake and reach out to Sunny, – he said.

Cloud stopped crying, and the Ocean did the same.

Having gathered in spirit, she emerged from the Ocean and flew up to Sunny. Crab clawed his claws approvingly, and Baby-Shark was swimming in circles so fast it seemed her black fin was dancing on the Ocean surface.

Sunny scolded Cloud a little, and praised her for the brave act, knowing how difficult it is to admit your own mistake.

Sunny equipped a pair of bright Beams and showed the direction.

– No, I’m a responsible Cloud here, – she said. – Heaven is my home. Better I go on the road, let Beams have some rest. I’ll cover them, like if they were little ones.

House liked to travel on Storm Cloud. Lilliputians-Giants made him laugh constantly, telling about their adventures. At times it seemed that they didn’t know how to keep quiet, even when Sunny had changed into purple clothes and was preparing to rest, and stars had formed intricate constellations.

– House! – An ecstatic voice suddenly came from the surrounding darkness.

The next moment, something small crashed into Storm Cloud and there was a little heavenly earthquake. It was Cloud. In the darkness she hadn’t noticed Storm Cloud, she saw only House Number Six with light in his round windows. She was so glad that she surrounded House and was hopping on Storm Cloud like a little girl.

Storm Cloud tried to bring some order so that no one was hurt: there were enough new and noisy stories on this journey and House was constantly shaking with laughter. And then there’s this Cloud jumping, and small lightnings were striking the ground from her hops.

– You have grown a lot, matured and became a real beauty, – said Storm Cloud.

At first, Cloud didn’t even understand who was speaking. And seeing serious and adult Storm Cloud, she became embarrassed immediately.

– Do not jump, please, or small lightnings can harm the ground.

Cloud carefully sat down next to House and looked like a small fluffy kitten. 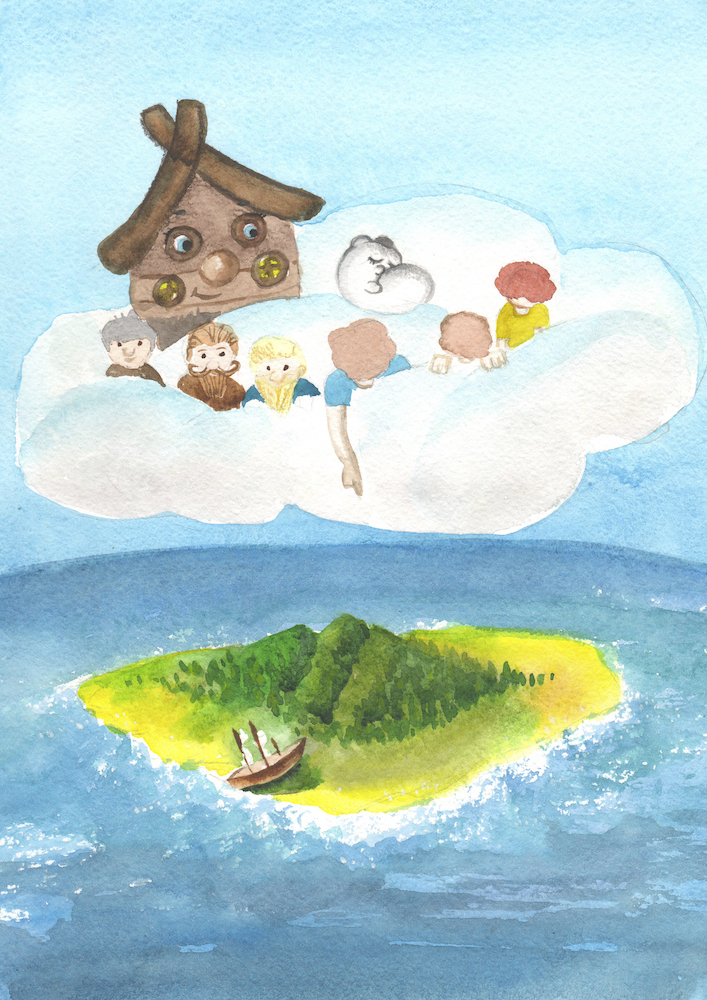 – An island below! – Cried the most attentive of Lilliputians-Giants.

And indeed, on a dark water’s edge there stood up a triangle. The outline of a real ship could be seen on its shore. Lilliputians-Giants desperately wanted to go down and check, if Mouse and Gnome were there, without waiting for Sunny to wake up.

– How are we going to get down? Sunny Beams are sleeping sweetly, – asked House number Six.

– We are going to sit in a circle and place Storm Cloud in the center. It jumps quietly, and we catch all the small lightnings and weave a ladder from them as Heavenly Master had taught us. We will go down this ladder to the island and, if our friends are there, then House Number Six can be carefully brought down.

Mouse, Captain Boris, and Gnome looked at the starry sky. Right above them there was a magic-starfall! Each of the friends, looking at the sparkling star, recalled his heart’s desire. Suddenly, straight from the sky a luminous ladder began to descend on them. Sparks, that accompanied it, scattered in millions of lights. Someone vaguely familiar came down the ladder.

– Wow! – Gnome was first to exclaim. Right to ocean sand from the night sky had descended all six Lilliputians-Giants.

Friends were so happy that trees were bouncing on the triangular island. The joy became even greater, when House Number Six had descended the ladder in a glowing cabin. 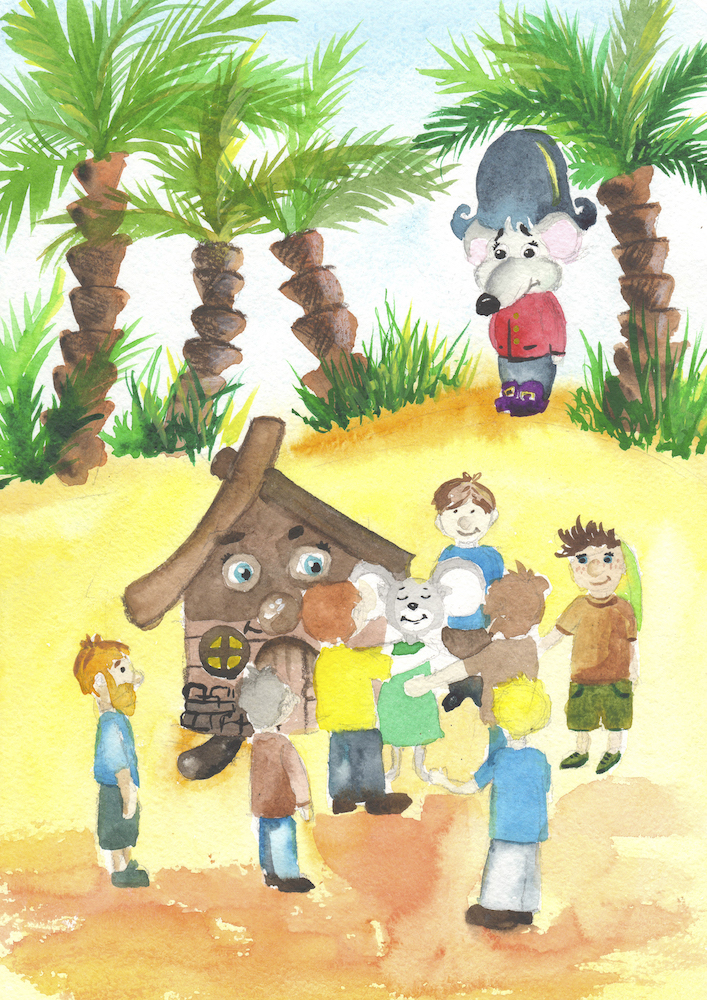 Captain Boris was a little confused watching hugging friends from the side. “Now hearts’ desire of Mouse and Gnome has come true. They won’t need Captain Boris anymore,” he thought bitterly.

Mouse looked at Lilliputians-Giants with astonishment: they were now of the same height as Gnome, and they were talking so gaily about their adventures on the way to young Sorceress.

When it was Gnome’s turn, he introduced Captain Boris to their friends as his new friend, leaving out the part how they had met. Captain Boris was very touched by tact and kind heart of his friend.

House Number Six invited everyone at table to drink tea with bagels and favorite raspberry jam.

So, during their night conversations, friends did not notice how the morning came and the first Sunny Beams were already peeking curiously into the windows.

– Now we have both Storm Cloud and responsible Cloud, – said happy Mouse. – We are going to fly home!!! The star fulfilled my heart’s desire.  Gnome shyly kept silent about the fact that his heart’s desire had also come true: more than anything else he wanted that his girlfriend Mouse wasn’t upset.

Captain Boris and six Lilliputians-Giants were silent. They were glad that friends were going to fly home. But why did not their hearts’ desires come true?

House Number Six, watching Captain Boris from the side, thought that he was afraid to stay alone on the island and said:

– Fly with us! There is enough space for everyone in Magic Forest.