Early in the morning they set out for their journey. The bottom of the coconut was covered with palm leaves. They took a supply of drinking water in small seashells. The ocean splashed waves gently. Sunny was playing in the water. Friends were relaxing.Suddenly everything went dark and rambling. Sunny hid the cloud. On the horizon there appeared a sinister ship.

– Why do you say that? – Mouse began talking mockingly and froze.

Although, there were no flags and sails on that boat, they could see clearly: at the stern there was a huge rat standing on one leg, wearing red caftan and a pirate patch on one eye, that covered his long whiskers. 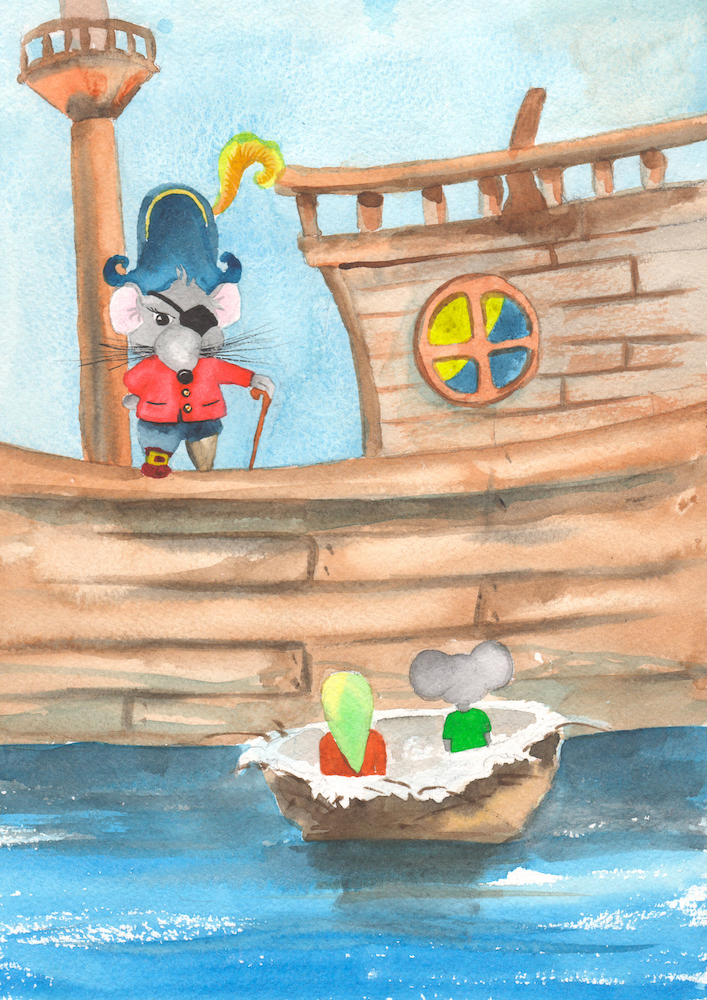 What can a small coconut boat do against an old broken fishing boat overrun by pirate rats!

A coconut boat was boarded. The friends were tied up and carried quickly to the boat. Mouse didn’t even have a chance to squeak – it all happened so quickly. The pirates ransacked friends’ boat and returned disappointed. They found no treasure, nor food there, and everything turned out somehow rude and stupid. Captain was embarrassed. The pirates were quiet. Mouse and Gnome awaited with horror for what was going to happen next.

– My name is Boris, – captain broke the silence. – Be my guests on this pirate ship.

As soon as the pirates heard that the friends found in the coconut shell were invited to their pirate ship, where everyone was already hungry enough, they moved rumbling toward one-legged captain. Captain Boris began to retreat to the bow of the boat, flinging himself in front of Mouse and  Gnome. Mouse retreated, feverishly going through the space with her tail until she grabbed a piece of paper.

Gnome snatched the paper from his friend’s tail and put it into the pocket of his jacket. On this ship he was the only one who could read, but he wasn’t up to this at the moment. Rats were coming. Suddenly, captain lost his balance and flopped. When he was falling, his leg got coughed on a piece of wood sticking out of the ship’s bottom, and … it fell off. While the wooden leg was jumping along the bottom, Captain Boris, to keep his balance, was standing on both feet.

This event had decided the outcome of the pirate battle, which hadn’t even began. Real pirates were so insulted that their captain was not one-legged, and, as it turned out, not one-eyed either, that they decided to cast him out with shame on an uninhabited island together with the captives.

Captain was tied up and put next to our friends. The pirates began to look in a large spyglass for an island where the prisoners could be dropped off. Time passed slowly. Gnome decided to take a closer look at the scrap of paper and discovered that it was a treasure map with the exact coordinates of the island.

Having decided at all costs to get to the right island, Gnome said to Mouse loudly:

– Hope they’re not going north to a triangular island.

Mouse froze, and the pirates grabbed a compass in a vigorous discussion. When the boat was heading towards the island, Mouse started weeping quietly …

– Why did you say that so loudly everyone has heard you?

– Let them do what they want, – said Captain Boris calmly, he knew about the Treasure Map too, but could not read it, because no one had taught him ABC.

Mouse froze frightened, she did not understand why  Gnome and captain were so calm. Meanwhile, the island appeared on the horizon and the pirates started chattering joyfully.

While landing the prisoners ashore, they were keeping their eyes open. They decided to untie only Mouse, because the overthrown Captain Boris still aroused horror at them. 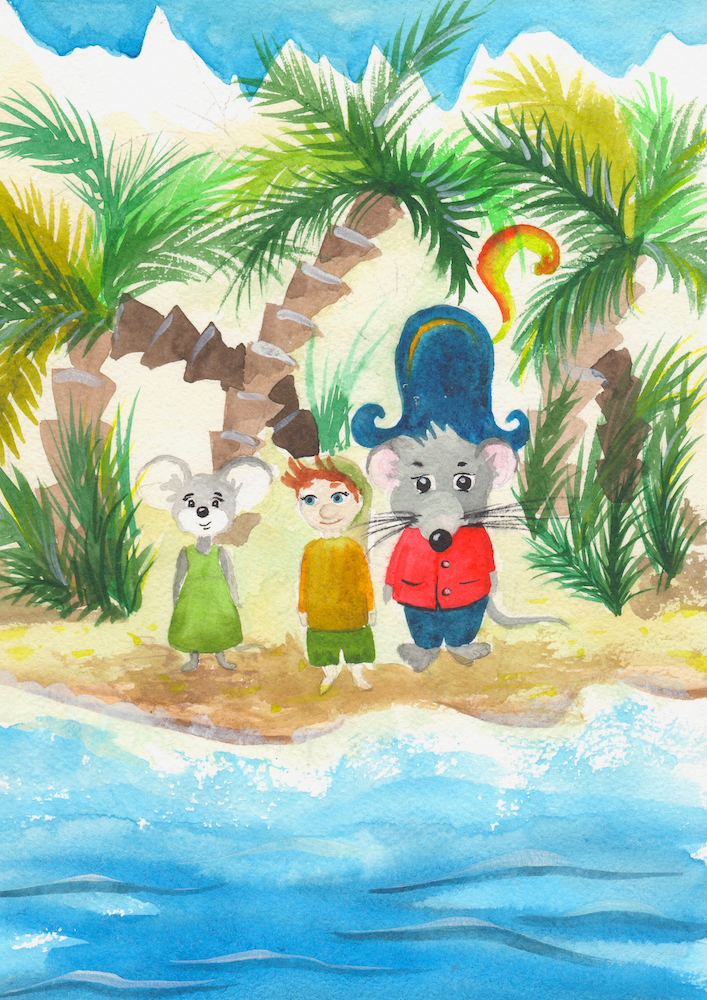 When the boat with pirates had sailed from the island, Gnome told about the map and the treasure. Mouse was relieved and began to untie friends with her tiny paws.

When they were released, friends set out to examine the island. Quite quickly they found the highest tree under which the treasure was buried.

Mouse and Captain Boris began to dig the sand with paws, Gnome paced around impatiently and suddenly …

“It’s a real ship!” – cried Captain Boris. And, really, under their paws appeared a mast, carefully wrapped in palm leaves, and then the whole hull of a ship. There were food supplies and tools inventory in the holds..