One day Mouse with her friend Gnome wanted to go to the Ocean. They have only heard about it before and these were mostly mysterious and unusual things. Our friends had restless character and started packing immediately.

First, they focused on finding of a large suitcase, in which the most necessary stuff would fit: the first thing they put there was a big butterfly net. Mouse was sure there should be a lot of  beautiful butterflies near the Ocean. Gnome didn’t share her enthusiasm, but, since he was a little man, he decided not to criticize his girlfriend. Next, swimsuits, Gnome flippers and underwater mask were thrown into the suitcase … Many of the most necessary things were packed, so many the suitcase wouldn’t close. 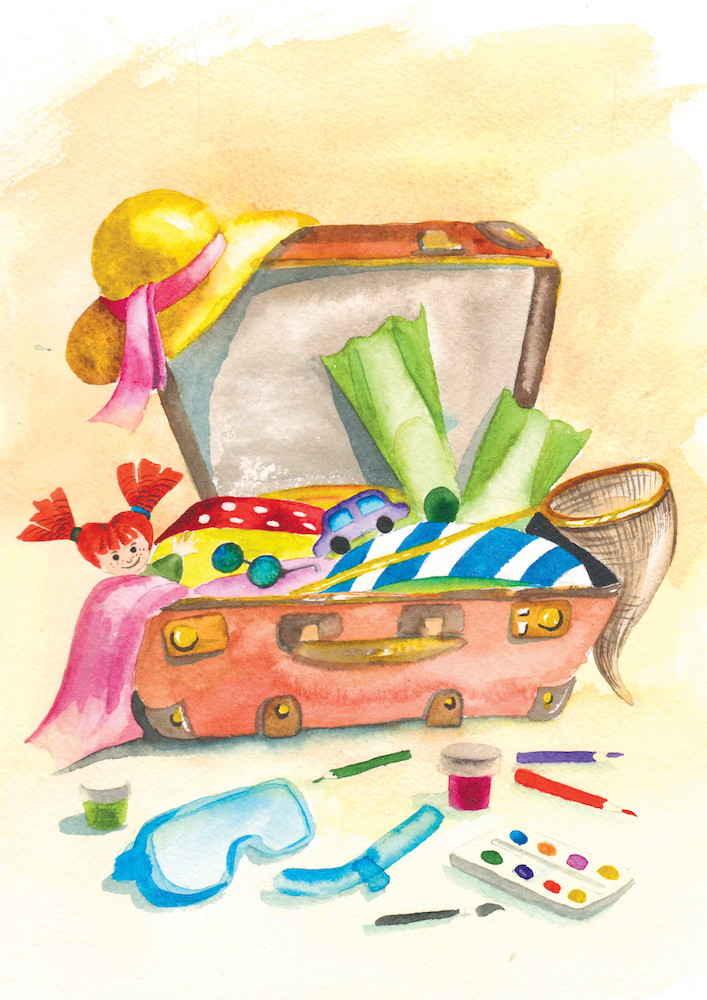 Seeing this, our friends decided to take their friend White Bear with them and ask him about the Ocean at the same time. White Bear has come and laughed for a long time, because if they managed close this suitcase somehow, even Brown Bear wouldn’t be strong enough to carry it. Friends were bitter for a short time and then cheerfully threw away, it would seem, the most necessary things on the road: dolls and toy cars, paints and pencils flew aside …

While they were going through their stuff, White Bear suddenly noticed that there was not a single warm thing in the suitcase and he, very much surprised, started to ask our friends how they were going to stay warm at the Arctic Ocean? And why should they go there at all? And maybe they decided to go to Antarctica to get acquainted with penguins? This was the first time White Bear has ever heard about warm Ocean… Gnome and Mouse stood puzzled. For some reason they thought that the Ocean is something very large and incredibly warm. This was the first time they both have heard about ice and penguins…

After staying for while with his upset friends, White Bear went home.

After discussion with House, Gnome decided to go into the forest. Friends came to the conclusion, that if there exists a cold Ocean, then it must be the warm one too. And the only possibility to find out if this was true, would be to ask wise Owl.

Owl loved cheerful Gnome and, having heard this sad story, she hurried into the house to see Mouse, which by this time was sitting waist-deep in a salt puddle of her tears and a big net for catching the most beautiful butterflies in the world was rocking next to her…

Owl began its story about the Ocean from afar, from the moment life started on Earth. She was speaking slowly and very thoroughly, putting on airs, of course; and Mouse, tired of her tears, quietly fell asleep in her bed, where Owl carried her despite the protesting sobs, having changed her into pajamas. Gnome courageously struggled with the desire to sleep and at some point, couldn’t stand it anymore and fell asleep. 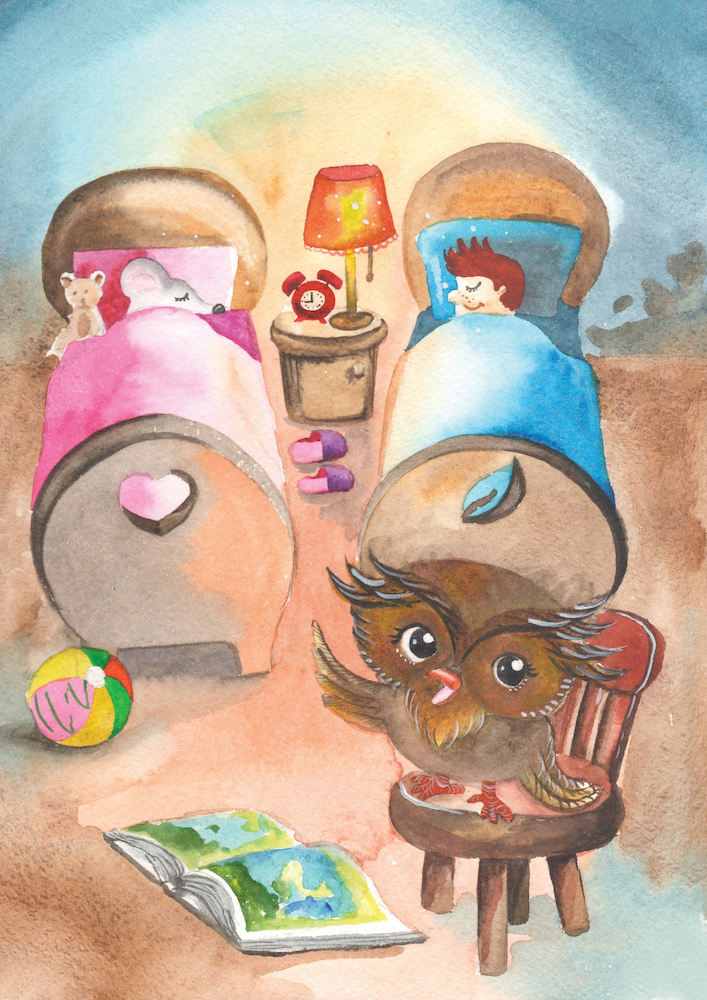 Owl sight in pretence, and, since she was already accustomed to friends dozing off during her night-time visits, she carried Gnome to his bed and tiptoed home, leaving a large atlas on the table. The warm Ocean was marked in this bright colorful atlas.

In the morning Mouse jumped from the bed because Gnome was shouting loud: “Hooray! We have a map, and we have almost packed our suitcase! We are real treasure hunters! But how do we get there?”

And then it dawned on them both, who may know exactly where the warm Ocean lies. It’s Sunny! How many tears would not have been shed, if they only had this thought yesterday …

Sunny listened to the friends, interrupting each other, with a smile. He lowered to the ground two strong beams and carefully lifted them up, closer to the clouds. Sunny has chosen the most responsible Cloud and showed her plan and map, then he said goodbye to friends, and told them to be careful and attentive. Only after friends have set off for the journey, they suddenly remembered about their big suitcase with the net for catching the most beautiful butterflies, but House Number Six was almost behind the horizon, and Cloud was not willing to go back. 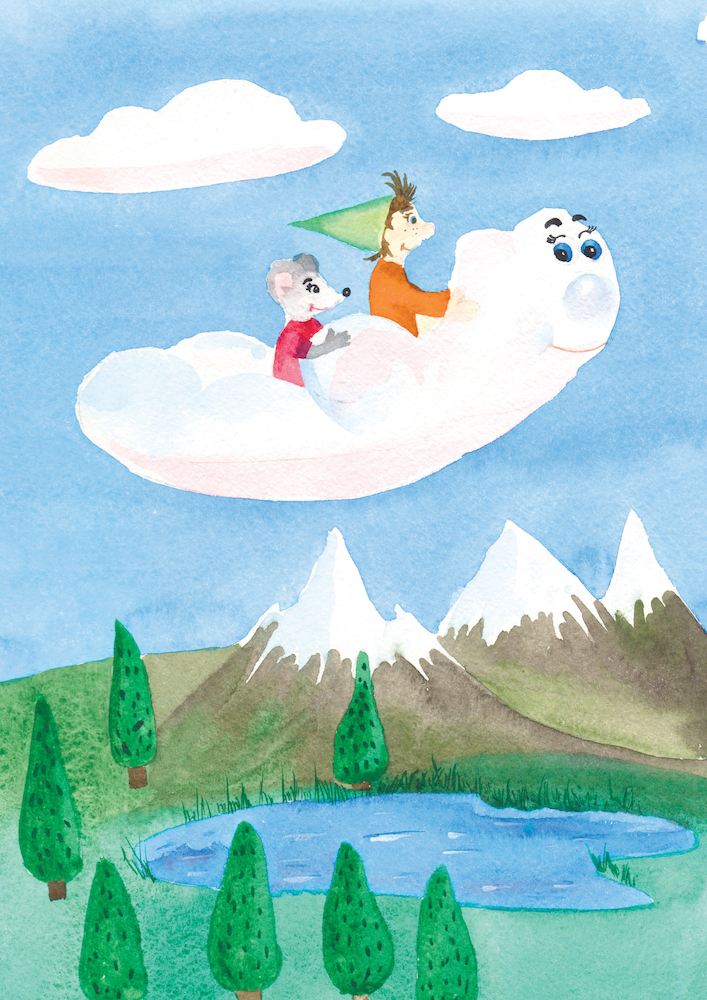 From the height of Cloud’s flight Mouse and Gnome examined enthusiastically tops of trees, blue depth of the lake, prickly and cold mountains … Cloud cheerfully talked with her foreign colleagues. She was intrigued too, because there was no Ocean in her homeland, and she tried to find out from all the large and small clouds what he was like…

The journey was long. At nights they wrapped themselves in a feather bed, and in the daytime they were waiting for birds to raise up carrying various berries for our friends to snack.

Finally, they arrived at the place. Cloud asked flirtatiously to tickle her, and we remember how to turn a cloud right way to make it rain. This rain formed a ladder and friends carefully went downstairs to an island of the unusual sundae wafer color. Cloud gradually poured herself into the big and warm Ocean in order to get to know him better.

Gnome and his faithful girlfriend Mouse stood on the shore and watched big waves with a sinking heart, which, if you squint, resembled large silver-tinged silk veil shimmering with all shades of green and blue. Friends used to think that “sea-green color” was just a beautiful expression, but now they observed it in its full glory. 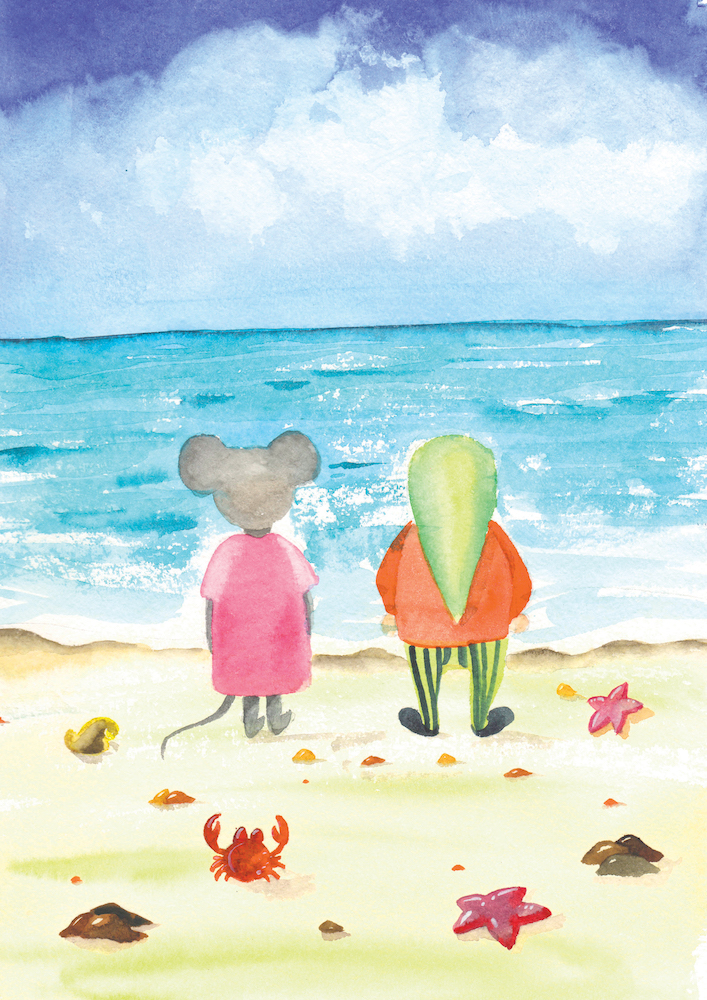 “The first thing we need is house,” he said seriously. “We need to have rest from the road.”

“But how can you build a house on an unfamiliar island? And what if it is dangerous here?” – Mouse became worried.