Having looked around very carefully friends decided to walk along a sandy shore. They had to solve an important problem: should their future house be built on the shore or in an unfamiliar dense green jungle? Mouse suddenly remembered that she was a real Field Mouse, and categorically stated that their new house should be a hole, which she would easily dig in the sand. Gnome did not argue. They went to choose a proper place and suddenly noticed a tremendous hole. It was so wide that they could enter into it together in a row. Mouse was overjoyed, because she wouldn’t have to dirty her coat and paws, and she went inside decisively. Gnome followed her cautiously. The hole went down at once, and soon the sunlight stopped getting inside. “Perhaps, it would be more prudent to sit on the beach and wait for the possible owner of the hole to come out?” – thought Gnome, but suddenly they heard a strange sound: “Сlack-clack …, Сlack-clack…” 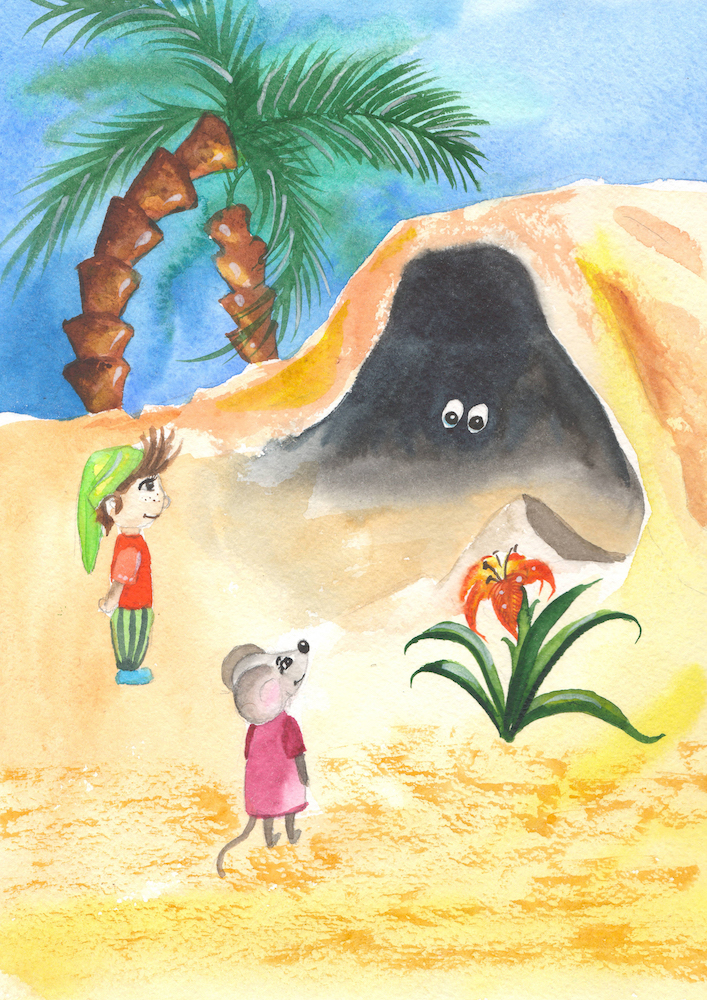 Mouse was frozen with indecision. She could see quite well under the ground, but she couldn’t understand where the sound came from. She took one more step and suddenly her paws felt something like stone. But this stone moved and made sounds …

– Let’s run! – she screamed, and our friends rushed out slipping on the wet sand. The sound gradually faded away. Mouse and Gnome collapsed on the sand beside the hole and took a deep breath.

An hour has passed. When they had coughed their breaths, Gnome brushed sand off his jacket and Mouse cleaned her coat with paws. No one came out of the hole and didn’t make any sound.

Another hour passed. Sunny began burning Mouse’s head hot and she went to the hole decisively again. – If there is someone alive inside, he must be very cowardly, otherwise, we would have been already eaten, – she said.

– You  don’t have to go with me. I can handle it myself,  – she added in a whisper; Gnome realized she was still a little scared and he took a stick with him.

This was the second time they started descending the hole to find the living stone inside. Mouse had reached the bottom of the hole vigorously, wisely deciding not to step on him, but to sit down nearby. Gnome stood behind her holding a huge stick, in case his girlfriend needed help. It’s been hours, when, finally, the stone opened one eye, and then the other. Two green lights suddenly lit up the space inside the hole.

“The stone with eyes is something really incredible,” Mouse thought, and began to pull her tail forward gently. And we all know, for any mouse her tail is a point of pride: the longer it is, the happier is its mistress. Mouse’s tail touched the stone and eyes closed.

Mouse put her tail back with a vexation, and here one eye opened, and then the other. The eyes were not like any eyes of the familiar animals. Round beads were turning in all directions and, it seemed, they could see behind themselves. Gnome was already tired of watching his friend’s experiments, and, in fact, it was high time to do something.

Mouse was satisfied with the result of her actions and resolutely went on attack:

– I am Crab, – answered the living stone.

“Crab?” The friends were incredulous. The reason is that they had seen real crabs only on pictures, and it was too dark to see in the hole.

Crab told Mouse and Gnome that he had no friends, because he is very cowardly. All the time he was sitting in his hole and clawing his claws with fear. Mouse felt really sorry for Crab: there was a beautiful sandy shore and tender Ocean around, but Crab was afraid to come out of his hole; and life is very difficult without a friend. There are friends for every day and for a particular day. Without her friend, Gnome, she could hardly live, and their common friend Sunny appeared rarely, but Mouse and Gnome both knew that if something very important happened, Sunny would be there for them. Gnome felt the same and they both didn’t hesitate to offer Crab their friendship.

Crab closed his eyes again, with embarrassment this time. He did not know what one should say in such cases and do afterwards …

Mouse took the situation in her hands and asked Crab to help them build a house, only three times bigger than his.

Crab was very pleased to help. This is a real task, and any deed is better than the most beautiful words. To begin with, he showed a place on the Ocean shore where tides couldn’t reach. It didn’t matter for his hole, but for Mouse and Gnome waking up early in the morning in a pool of salt water would be very bad indeed – one may even drown. When the place was chosen, Gnome went to look for something they could lay on the floor, and on the way he thought about the material he could make beds from.

Mouse with Crab began to dig a large hole very fast. Crab grabbed sand into his claws and carried it to the surface. Mouse deepened the inside of the hole with her tiny paws.

When everything was almost done, the friends found two big piles next to the new hole – one pile of sand, and the other of palm leaves. Gnome had dragged them and already made a wicker table trying to figure out how big a wicker bed should be. 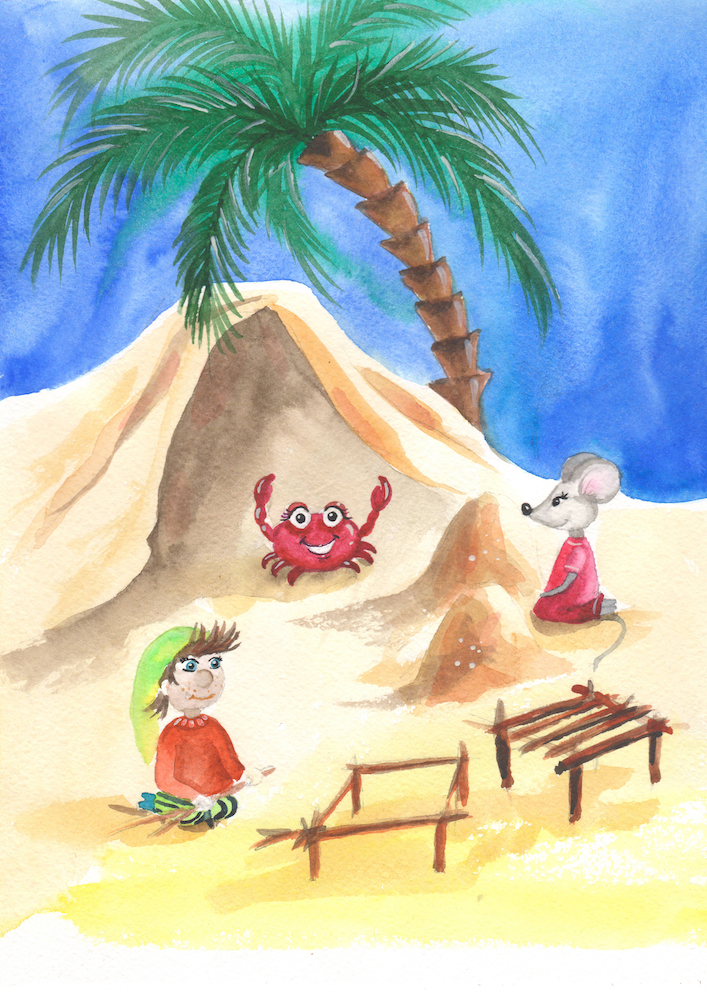 Crab was looking shyly at his friends. Finally, he decided to ask: “Why they, so small, needed the hole three times bigger than his?” Mouse laughed loudly and began to tell Crab a children’s fairy tale “Little house”…

At that moment, Crab suddenly realized that he, without any reason or conditions, simply because they were friends, was offered to live together with friends in a large cozy house.

At this time, the most beautiful Sunny in the world, dressed up in beautiful red clothes, sent tender evening beams to say goodbye to friends for the night.

Little ones picked up wicker beds, went inside their house and fell asleep, tired of such a long day on an island by the Ocean.